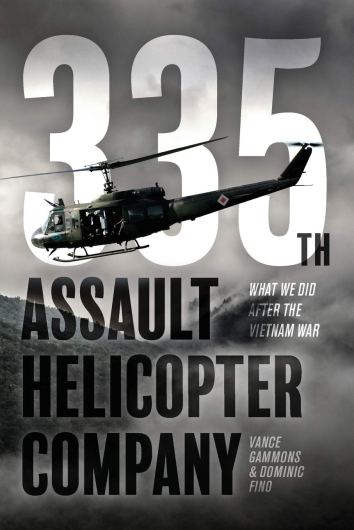 Vance Gammons and Dominic Fino’s 335th Assault Helicopter Company: What We Did after the Vietnam War. (Deeds Publishing, 296 pp., $19.95, paper) is an interesting look at the post-Vietnam War lives of the members of the Cowboy Company, a stand-alone Air Assault Helicopter company created in September 1966 to work with a variety of infantry units.

The unit, a company of lift ships and their personnel, fitted the needs of the Army in Vietnam to provide the flexibility for ground troops who did not possess their own transportation onto the battlefield.  As such, the 335th provided service to the leg units of the 173rd Airborne Brigade from 1965 until its stand down in November 1971.

The book is a compilation of the post-war biographies of the men who served with the unit. Knowing the pilots and crew members’ propensity for quick, accurate verbal communications, the book surprises with some lengthy personal biographies, along with some extremely brief ones that let the reader fill in the spaces between comments.

Some of the men went on to lead rich and colorful lives. Some of the biographical sketches show the pain and heartaches that others bore during their time in the war.

What comes through clearly in all of them is the brotherly bonds created by the camaraderie of their time as Assault Helicopter men. The pride of their service is evident in all the stories.

A particularly heartbreaking biography submitted by the widow of Ed Eget tells of a lifetime of hard work punctuated by lingering health problems related to his service in Vietnam. It is easy to see the effects of combat on each person in every story—including Agent Orange and PTSD.

Dominic Fino, one of the co-authors, tells of his struggles with bits of sarcastic humor and honesty.

The book shows Vietnam War veterans as we returned home, put on civilian clothes, and went about making productive lives. It also shows the resiliency of the American citizen soldier who faced extreme danger in war, yet overcame that to grow into substantial contributing members of society.

A former First Cavalry Division LT, Bud Alley is the author of The Ghosts of the Green Grass, which looks at the fighting at LZ Albany during the 1965 Vietnam War Battle of the Ia Drang Valley