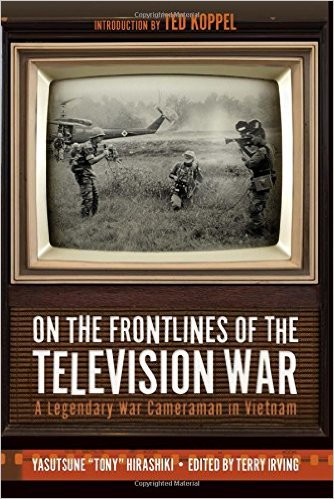 In On the Frontlines of the Television War: A Legendary War Cameraman in Vietnam (Casemate, 304 pp., $32.95; $9.99, Kindle), Yasutsune “Tony” Hirashiki describes his experience in the Vietnam War from 1966 to the communist takeover in 1975 working behind the camera for ABC News. The eyewitness accounts of the many phases of the war in this memoir bring events to life as if they had happened yesterday.

In his quest “to become as good as [the famed photojournalist] Robert Capa,” Hirashiki chose to cover the most dangerous assignments in the war. “Many of us dreamed that war reporting would find us fame and recognition within our profession,” he says. For Hirashiki, the dream materialized in the form of a forty-year career with ABC News.

The uncertainty of survival loomed as the primary obstacle to fulfilling that wish. “In many ways, we all felt that we were pushing our luck every time we tried to cover a story,” Hirashiki says. He talks about correspondents who died or disappeared in the war, particularly freelancers.

Hirashiki worked with many famous correspondents. The list includes Sam Donaldson, Peter Jennings, Ted Koppel (who wrote the book’s Introduction), and Drew Pearson. Without a school for combat photography, Hirashiki mastered his skills on the job. Reporters normally operated as a three-man team—photographer, sound man, and correspondent. Hirashiki tells dramatic stories that involve a long list of teammates. He frequently cites these men as teachers and heroes who taught him the finer points of journalism.

His stories are interesting because Hirashiki complements his views with observations by other people who were involved in each incident. Often, this comes from post-war letters that deepen the significance of an event. The acute details of his recollections of a battle in Happy Valley and the chaos leading to the war’s end—which open and close the book—provide highly informative and enjoyable reading.

Following the 1973 ceasefire in Vietnam, Hirashiki temporarily moved to Phnom Penh. He describes the Khmer Rouge assault on that city’s civilians as “scenes from hell.” This gave me the impression that this action was more horrendous than what Hirashiki had seen in Vietnam. 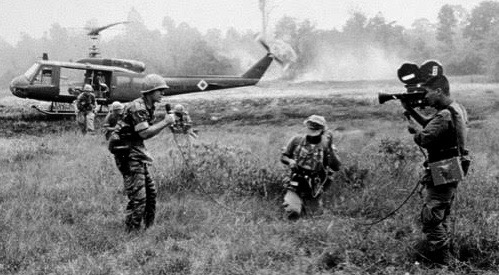 The book’s importance lies in its neutrality. Many people have criticized Vietnam War correspondents, especially television reporters, for promoting antiwar sentiments. On the Frontlines of the Television War, which was edited by Terry Irving, contradicts that opinion by telling the story of a closely knit group of professionals who strove to report what they saw as accurately as possible.

In other words, any distortion in television reporting did not originate in the field.

Greenway arrived in Saigon in 1967 where “life was pleasant and safe enough for the moment.” That soon changed drastically with the 1968 Tet Offensive. In February Greenway hustled off to Hue to cover the action. At at one dicey point he wound up picking up an M-16 and firing at the enemy.

Soon thereafter, he was hit by rocket-propelled grenade fragments as he, two other civilian journalists (Charlie Mohr of The New York Times and Al Webb of UPI), and Marine combat correspondent Steve Bernston carried a severely wounded Marine out from under enemy fire. The Marine Corps later awarded the three civilians—Mohr, Webb, and Greenway—and Sgt. Bernston the Bronze Star for their courage under fire.

You would expect an experienced journalist to present a well-written memoir. Greenway comes through on that score. His writing is crisp and his insights are often telling. That includes this assessment of the Vietnam War:

America “came to save the Vietnamese from Communism, not exploit them economically as the French, and there were many, especially among the propertied classes, who feared Communism and appreciated our effort. As for the peasantry in the countryside, they just wanted to be left alone.”

And this on the American military’s handling of corespondents: “The U.S. military was always upbeat, and if you stayed in Saigon you might think the war was being won. If there was one trait that trumped all the others during the long war, it was American self-delusion. As Sebastian Junger would later write about Afghanistan, it wasn’t as if American officials were actually lying to you about the progress of the war. They were just inviting you to join in a conspiracy of wishful thinking.”

Greenway also gives us a good deal about his fellow correspondents in Vietnam, including Michael Herr, Gloria Emerson, David Halberstam, Dick Swanson, R.W. Apple, and Stanley Karnow. He writes about hanging out with the photographers Sean Flynn and Dana Stone in Cambodia in April 1970, days before they rode their motorbikes toward Khmer Rouge positions and were never seen again.

Beverly Deepe Keever spent more than seven years as a magazine and newspaper correspondent covering the war in Vietnam. She arrived in 1962 at age twenty-six as a free-lance reporter after having received her MA in journalism from Columbia Journalism School. She left in 1969, after writing countless articles, mainly for Newsweek, the Christian Science Monitor. and the New York Herald Tribune.

In her new memoir, Death Zones and Darling Spies: Seven Years of Vietnam War Reporting (University of Nebraska Press, 360 pp., $26.95), Beverly Deepe Keever does an excellent job of recounting her unique Vietnam War experiences. The book, she notes, is “more than just my re-reporting of the Vietnam War or my instant replay of the history that I witnessed.” In her book Keever fills out what she experienced with information that she couldn’t write about at the time—mainly from secret government documents about the war that later surfaced in The Pentagon Papers.

When Keever arrived in Saigon only eight other Western correspondents were working there full time. All were men, including Neil Sheehan, Francois Sully, and Malcolm Brown. David Halberstam arrived shortly after Keever did. When Beverly Keever left Vietnam seven years later more than six hundred journalists were on the scene.

The war was very different in 1962 and 1968 and Keever was among the very few correspondents who witnessed the massive changes that took place as the U.S. effort grew from a relatively small advisory force to more then a half million Americans troops on the ground by the middle of 1968.

Her memoir, therefore, is unique among the many first-person Vietnam War accounts by former correspondents because Keever was present and reported on the war in the early, mid,and late sixties. She was there in November of 1963, for example, covering the violent overthrow of the regime of South Vietnamese Premier Ngo Dinh Diem; and Keever was there with the Marines at the Siege of Khe Sanh in the spring and summer of 1968.

The “darling spies” Keever’s subtitle refers to are Pham Xuan An, who worked closely with Keever and other American correspondents—and after the war was unmasked as having been a VC colonel who was feeding information to the North Vietnamese—and An’s message passer, Nguyen Thi Ba, “a gray-haired vendor of children’s toys,” as Keever puts it, “who had taken up the revolutionary cause in 1940.”