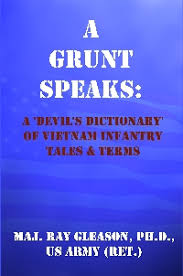 Ray Gleason is a retired Army Major. He served in Vietnam as a rifleman with A Company, 2nd Battalion, 35th Infantry and was also a LRRP team leader with the 75th Infantry. He tells us in A Grunt Speaks: A Devil’s Dictionary of Vietnam Infantry Tales and Terms (Unlimited Publishing,232 pp., $14.99, paper) that he still has his P38. I have mine, too, hanging on my dogtag chain right next to my dogtags.

Gleason is a lecturer in medieval literature at Northwestern University in Chicago. He also teaches leadership and ethics at the Culver Academies, a boarding school in Indiana.

In many ways, I am the perfect reviewer for this handsome, well-written, well designed, and very unusual reference book. I’m an Army veteran, I served in Vietnam, and I spent thirty years as a college reference librarian. I’m also a great admirer of Ambrose Bierce, to whom the author pays homage in the subtitle, “Devil’s Dictionary.” I served in Vietnam for thirteen months, although in a very different role than Gleason’s. He was in the infantry; I was in the rear.

So I wondered how long I’d have to read before I’d encounter the term “REMF” in this grunt book. Not long. It is on the back cover, and it appears on the earliest numbered page in the book.

I’ve read all of the many reference books that attempt to include and explain the military terms of the American War in Vietnam, and I’ve developed a quick and dirty way to start my evaluation of a new one. The first term I look up is always “REMF.”

This book is usefully arranged alphabetically and the arrangement works.  As the first entry in the “R” section, I found a three-page entry under “REMF.” Early in the entry, Gleason chooses to perpetuate the near myth that REMF clerks used their skills to award themselves CIB’s (Combat Infantryman Badges.)  Maybe somewhere, sometime, a REMF did that.  But I consider it even more unlikely than the near myth of the long-haired, braless hippie girl at the San Francisco Airport spitting on a newly returned Vietnam veteran and calling him a baby killer.

I’m unconvinced that these things ever happened as described, but I confess my skepticism has its roots in my personal history. I never encountered either. Hippie girls were always nice as pie to me and the last thing I ever wanted was a CIB.

I knew a lot of clerks and jerks in Vietnam and since and none ever expressed any interest in bilking the Army out of a CIB. Besides, the clerks and jerks lacked the proper MOS for a CIB. From what I understand, you had to have be an 11-Bravo or another infantry MOS to be considered for a CIB. That was true even if you had received a Bronze Star for valor defending your air-conditioned office when it was overrun by VC during the Tet Offensive .

Gleason says in his REMF entry that “no one reading this would ever acknowledge that it describes them.” I do acknowledge that his entry applies to me. I suspect it also applies to hundreds of thousands of other clerks and jerks who served in the rear in Vietnam, and who relished—as Gleason puts it—“three hots a day, sleeping on a bunk out of the rain, sleeping entire nights without having to pull guard, having a club to drink cold beer and other forms of chilled alcohol, having access to hot showers, sleeping without boots, wearing clean pressed uniforms with patches and insignia of rank properly attached.”

Yes, I felt entitled to those things, and I especially gloried in the showers.  But so what?  Most grunts would have gloried in these comforts, too.Enough about the “REMF” entry, even if it does work well as an example of how this book operates. As the subtitle indicates, the book has both terms and tales. The anecdotes are intended to illuminate the definitions of the terms, and they usually do.

My next step was to look up the definition of “Ham and Motherfuckers” to see how Gleason deals with this delicate term. I turned to the “H” section to see what I could find. No ham and motherfuckers. Okay. So I went to the back of the book for a look at the index. Perhaps the term was buried in some other section. There is no index.

There was a notice that Gleason’s next book would be a “Gruntionary.”  Perhaps that forthcoming work will include an entry on this special term.Then I looked for “C-Rats,” and found four pages of useful information. Something Gleason calls “Ham and Bullets” is on his list of “C-Rats normally avoided.” This must be the usually loathed ham and lima beans which are usually referred to as “ham and motherfuckers” in the grunt literature, both novels and memoirs. The C-Rat entry is typical of most in this book: It’s detailed, helpful, and contains an interesting personal anecdote.

I went back and read the entire book, encountering a very useful entry on Agent Orange and a moving entry on Ann-Margaret. I found no entry on Jane Fonda, although she is mentioned in the book more than once.  Reference books seldom are best served by reading them straight through, but by dipping into them to get a quick answer. But this book held up to this treatment.

I will put this dictionary on the big shelf of Vietnam War books in my study and will consult it when I have a grunt term to look up. Gleason declares his focus in the title and the book does not let us down. Its bias is unashamedly “grunt.”  If this focus grates on a REMF reader, he or she has the option of producing a REMF reference book.

I thought of “A REMF Speaks.”  It’s a temptation, but I’ll pass. Book sales have already proven there is a much greater market and readership for grunt and LRRP books about the Vietnam War than for REMF books.

Which is odd because World War II produced many REMF bestsellers, books such as Tales of the South Pacific, Mr. Roberts, The Caine Mutiny, and From Here to Eternity.  These books were fundamentally non-combat books.

It was a different time.