Kubisz’s publisher says that he “clearly has much in common with Hawkeye Pierce of M*A*S*H,” so, being a fan of the TV series, I was excited to have this book in my hands. As I began to read, I did see some similarities between his life story and Dr. Hawkeye Pierce in the popular TV sitcom and Hollywood movie.

But I also was disillusioned with Kubisz’s disdain for the Army. When most of us had to deal with less-than-stellar superiors, red tape, or insufficient materiel, we sucked it up and made the best of it while trying to follow military SOP. Kubisz, on the other hand, did it the Hawkeye Pierce way. One main reason for SOP is to enable a smooth transfer of duties when personnel are replaced. When Kubisz and his ragtag crew rotated back to The World, their replacements were left to deal with a nonstandard operation.

That said, this book is well written, well presented and a pleasure to read. Kubisz performed amazing—even heroic—feats with Paper and his other patients. He showed great compassion for the dogs and their handlers and he improved the level of veterinary care for all the U.S. war dogs in Vietnam.

The story of the dog named Paper and his 101st Airborne handler Tom Hewitt makes up nearly half of the book and is heartwarming and insightful.

Paper Dog contains a lot of good information and many photos. Be prepared to meet an Army officer with very little military bearing, but do read this well-written and very interesting book. 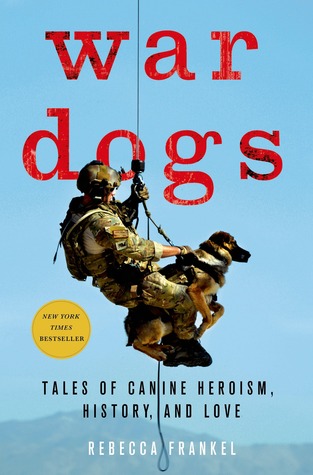 Rebecca Frankel earned the nickname “Chief Canine Correspondent” in 2010 at serious-minded Foreign Policy magazine where she works after she began writing a weekly blog feature called “Rebecca’s War Dog of the Week.” Frankel, the magazine’s senior editor for special projects, had just put together a photo essay called “War Dog” in the magazine. Researching and writing that article opened her “eyes to the wide world of war dogs,” Frankel writes in War Dogs: Tales of Canine Heroism, History and Love (Palgrave Macmillan, 251 pp., $26), an engagingly written look at dogs and their handlers in the U.S. military.

Most of the book deals with today’s military and the nation’s most recent wars in Afghanistan and Iraq. But Frankel also weaves in the history of the use of dogs in wars. That includes the American war in Vietnam where dogs did valuable work in many areas, most significantly in helping detect “booby traps, land mines, trip wires, and the enemy’s intricate tunnel system,” as Frankel notes.

“From the beginning of their use in VIetnam, these canine teams gave patrols negotiating the froth and fray of the jungle an advantage against the guerrilla tactics used by Vietcong,” she writes. “Within a year of scout dogs’ arrival in Vietnam, they are reported to have saved over 2,000 lives.”

Frankel devotes part of one chapter to telling the story of Ron Aiello, who served as a scout dog handler in the Vietnam War. Former Marine Aiello “still beams with pride for Stormy, the dog who accompanied him to Vietnam,” she writes. “From the way Aiello talks about her—immediate, vivid, and joyful—it’s as if Stormy is somehow at his feet or dozing in the next room, instead of a memory from a lifetime nearly half a century old.” 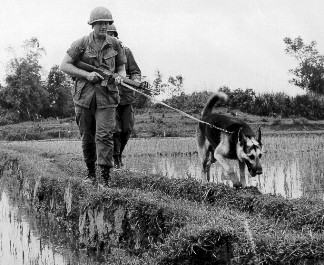 Stormy, a German Shepherd mix, “was a lovable, friendly dog,” who performed extremely effectively in Vietnam. The story of Ron Aiello and Stormy, though, has a sad ending. Stormy stayed behind when Aiello rotated home in 1967. Aiello slept on the ground next to Stormy his last night in country to be with her “until the very last moment.” He spent years trying to find out what became of his beloved dog, but as was the case with “the majority of the some 10,000 handlers who served in Vietnam, Aiello never saw his dog again.”

Frankel says that some 5,000 dogs served in Vietnam from 1964-75, and only 204 came home to the U.S. Those left behind “were either euthanized or turned over to the South Vietnamese Army, which likely meant death.”

This book is written with strong empathy for war dogs, dogs in general, and military dog handlers. It’s sure to appeal to dog lovers of every stripe.

The author’s web site is www.rebecca-frankel.com