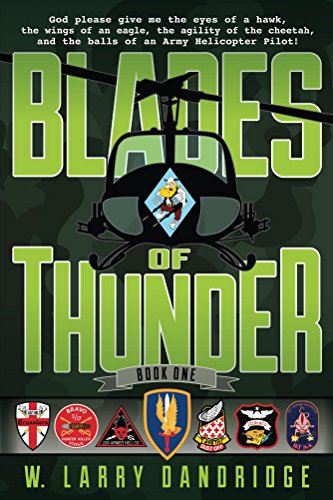 Blades of Thunder: The True Stories of Army Helicopter Pilots, Crew Chiefs, and Door Gunners in Vietnam, Book One (TVV Publishing, 428 pp. $17.99, paper; $4.99, Kindle) is a work of love, admiration, and respect for men that author W. Larry Dandridge served with in the Vietnam War.

Initially published Blades of Thunder in 2015, Dandridge updated the book late in 2017 partly to earn money to support Fisher House in Charleston, South Carolina, which serves families of veterans undergoing treatment at the local VA Medical Center. He also voluntarily fills several advisory roles at the Center. For the retired Army lieutenant colonel, life has no dull moments.

Dandridge is an old-school raconteur who finds interest in personalities as well as events. His stories revolve around friends he made while learning to fly helicopters and then going to Vietnam together. During an assignment with the 121st Assault Helicopter Company at Soc Trang in 1968-69, Dandridge flew Hueys.

The book’s opening chapter describes his crash in a helicopter, his severe injuries, and his physical reconstruction. The chapter is a stunning opening for a long series of flying stories about chaotic situations and other adventures.

Amid the war scenes, Dandridge includes an award-winning leadership speech he presents that sets standards for any leader, military or civilian. This demanding kick-ass address puts everyone and everything in place. He counterbalances his authoritarianism with clever jokes.

The book’s many images include detailed captions that give the reader an on-the-scene feeling. Among the book’s eleven appendices, a collection of forty-four “Lessons Learned and Lessons Perhaps Not Learned” is the most noteworthy. In it, Dandridge evaluates warfare in thought-provoking lessons that cover issues from grand strategy to day-by-day tactics.

On the higher level, he suggests an isolationist approach by America to military intervention overseas. He summarizes many lessons at this level by labeling them “only partially learned.”

Most lessons for everyday tactics, which constitute the bulk of the appendix, conclude with “learned but…” and require “today’s aviators [to] benefit from reviewing such lessons.” Others focus on people and projects deserving special recognition.

As a fan of helicopter crews, I look forward to Book Two, which Dandridge indicates will be published by the end of this year. 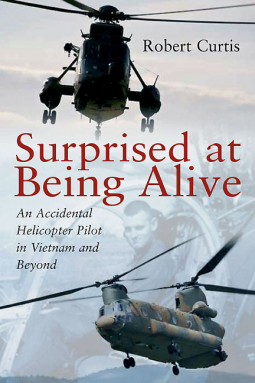 A footlocker filled with letters and tapes served as the impetus for Jim and Annie Weatherill to recreate 1968 as they lived it in The Blades Carry Me: Inside the Helicopter War in Vietnam (WxillWords Press, 267 pp., $11.84, paper; $9.99, Kindle).

From November 1967 to November 1968, Army Warrant Officer Jim Weatherill piloted CH-47 Chinook helicopters out of Phu Hiep in Vietnam. Annie Weatherill attended the University of California at Riverside as a senior. She was pregnant. They had been married for a year before Jim went to war.

Their book reads like a novel—a good novel. Jim and Annie are the protagonists, but as Jim explains: “People are composites. Conversations are re-created and represented the way we spoke. Names and identifying characteristics are changed to protect each person’s privacy and right to tell his own story.”

Written forty-fives years after the events took place, the book’s tone has a maturity beyond Jim’s age. He was twenty-two back in the day. Yet the tone retains the spirit of spontaneity, confidence, competitiveness, and humor inherent in youth.

Jim’s ability to blend the two moods is enviable. The scenes in Vietnam present a tight and convincing package of what it was like to fly the Chinook in combat. Jim Weatherill best describes that role when he writes, “War for Chinook pilots is mostly resupply and waiting to get shot.”

The book is loaded with emotion-provoking and breath-taking events. That includes the tension and even insubordination during briefings before missions such as a tactical emergency with a fifty percent survival estimate. Then there is the enmity between old-timers and new guys. On Jim’s first in-country flight as a co-pilot, the pilot climbed in next to him, said, “Don’t touch anything,” and then ignored him.

After the pilot nearly destroyed their helicopter, he wanted to forget it. Jim, however, refused to cooperate and got tagged with an “authority problem.” By the way, the vivid description of the problem gave me goosebumps. 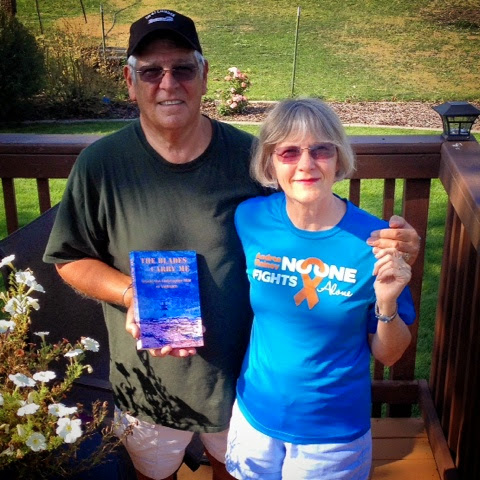 Jim eventually became the only WO1 Chinook instructor pilot in Vietnam.

The book follows Jim and his best friends—two of whom bordered on sex-crazed—through many life-threatening as well as humorous encounters. During the Tet Offensive in the Central Highlands where Jim’s squadron operated, the entire landscape became a hot fire zone shrouded in ugly weather. Jim’s life evolved into a constant test of skill and daring delivering support and rescuing people in jeopardy.

As a result, his crew repeatedly performed feats far above the call of duty. At one point, after flying more than thirty-three hours in three days, he said, “We feel nothing, remember nothing. My youth is drowning in the flood of bloody missions. I can’t be so ancient at twenty-two.”

Annie’s life at home is equally well described, particularly her giving birth to their daughter. “I’m a walking blues song,” she writes. “Thanks to post-pregnancy hormones, I’m euphoric and terrified and despondent—sometimes all at once.”

Yet Annie persevered in meeting every obligation of infant care and schoolwork. Her devotion to her tasks and to a future with her husband exemplifies the dependability of the many of the women whose men were at war a half century ago.

After leaving the Army, Jim continued piloting as a career, eventually retiring as a Boeing 737 captain for a commercial airline.

Each book I read about the Vietnam War offers something new. In this one it was the Worry Line: “The Worry Line—the crossing point into battle—draws itself across a person’s path,” Jim Weatherill writes. “Sometimes it’s at the hooch door, sometimes at the operation briefing and sometimes its attached to bullets coming up from the jungle. It’s a soldier’s early warning system.”

Based on this, I figure that my own Worry Line began at an April 1968 briefing when our crew was designated as the first C-130 to drop CDS bundles in the A Shau Valley. The previous afternoon a C-130 had been shot down there with the loss of an entire crew from our squadron. Sad to say, in our haste to get in and out, we dropped short of the DZ.

Thanks for the memory, Jim.