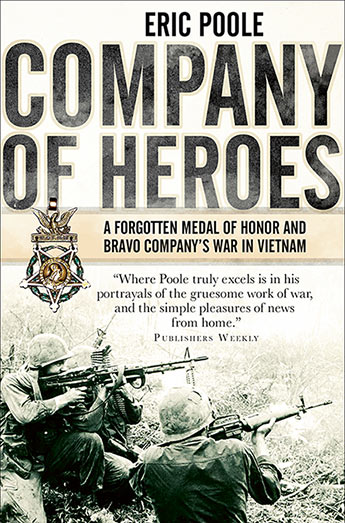 The fight begins with a North Vietnamese Army mortar attack that detonates a makeshift ammo dump at Fire Support Base Cudgel. One round momentarily stuns PFC Sammy Lee Davis, one of forty-two U.S. Army artillerymen at the site. Then a bugle call signals a charge by hundreds of NVA soldiers.

Sammy Lee Davis, with Caroline Lambert, describes that scene to begin You Don’t Lose ‘Til You Quit Trying: Lessons on Adversity and Victory from a Vietnam Veteran and Medal of Honor Recipient  (Berkley, 275 pp.; $27 hardcover; $13.99, Kindle). Davis received the Medal of Honor for his actions that day. But the book recounts far more than that event.

Sammy Davis most definitely is his own man, fully cognizant of his capabilities. His greatest attributes are self-sufficiency and unselfish concern for others. His upbringing had role-model quality. His parents and two older brothers taught him how to take care of himself, traits he passed to two younger sisters and another brother. His mother repeatedly told him, “You don’t lose ’til you quit trying,” which she learned from her father.

Davis was precocious in dealing with everyday matters. He learned to drive at the age of five, and got his license at thirteen. At eight, he learned to handle firearms and hunt. He always had a job—as newsboy, a cook, a lumberjack., a powder monkey. When he enlisted in the Army at twenty in 1966, he followed a family tradition of military service that stretched back to the Spanish-American War.

At Cudgel, wounded by both enemy and friendly fire, Davis singlehandedly fought back with his rifle, a machinegun, and a howitzer. His actions stalled the NVA charge, then he crossed a canal under fire and rescued three wounded and stranded infantrymen.

His post-battle story follows a pattern that challenges reason. His injuries included kidney perforations and vertebra inflicted by flechettes that also shredded his lower back; a bullet in his leg; ribs separated from his sternum; shrapnel wounds and burns across his face, hands, and neck; and traumatic brain damage. Doctors treated Davis in Saigon and then shipped him to  Japan. He appeared destined for return to the United States. Instead, Davis persuaded Gen. William Westmoreland to allow him to return to his unit as soon as he could walk.

“I still don’t know how I managed to convince anyone to call the highest-ranking U.S. general in Vietnam,” Davis says.

Davis returned to Saigon for rehabilitation and eventually to his unit at Tan Tru, where he completed his recovery. He fought in Cholon during the 1968 Tet Offensive. In March of that year he finished his tour of day.

His return to the United States included a band of hippies accosting him and two traveling companions at the airport in San Francisco with acts of disrespect beyond anything I knew. The confrontation introduced Davis to the fringes of the antiwar movement.

During his last eighteen months on active duty, Davis often was assigned to speak publicly on behalf of the Army. He experienced more disrespectful treatment. After his discharge and up to today, Davis has continued to make public appearances and speak to “whoever will listen,” including veterans, soldiers, business people, and schoolchildren. His goal in life is to be “a good man.” His speeches emphasize duty, honor, and country. He tolerates protesting war but not the warrior.

Medical problems have plagued Davis since his discharge. Agent Orange damaged his body in ways that required many operations. He also suffered from post-traumatic stress with nightmares and flashbacks. For years, he slept only in two-hour increments.

Beyond describing the events in his life, Sammy Lee Davis also provides an insightful picture of what it is like to receive a Medal of Honor. The award brings a high degree of recognition and privilege. But, of course, the act that qualifies a person for the medal also elevates that person far above average. I was unaware of several of the well-deserved benefits MOH recipients receive.

“The Medal of Honor changed my life in ways I never expected. Wearing it comes with duties and obligations,” Davis says, “honoring what it represents and refraining from anything that would tarnish what it stands for.”

If you get your hands on a copy of By Honor Bound (St. Martin’s Press, 288 pp., $26.99; $12.99, Kindle), skip the blurbs on the book’s jacket as well as the Forward, Preface, Introduction, and Epigraph. The book’s subtitle—Two Navy SEALs, The Medal of Honor, and a Story of Extraordinary Courage—provides all the background you need.

Start reading on the first page—”Part 1: Bat 21″–in which prolific author (and former SEAL) Dick Couch tells the story of Tom Norris and Mike Thornton so completely and seamlessly that if you are the least bit militarily inclined, he will instantly capture your full attention. His narration unreels with mounting suspense.

I was continually dazzled by the selfless dedication of Norris and Thornton, both of whom received the Medal of Honor for carrying out rescue and reconnaissance missions behind North Vietnamese Army lines near the Cam Lo bridge and inside the Demilitarized Zone in 1972.

Couch took me into the SEAL world and I simply could not stop reading. In one sitting, I finished the book’s first 170 pages, which describe Norris and Thornton’s heroic efforts. The magnitude of their dilemmas and feats left me teary-eyed and speechless, incapable of reading the best passages aloud to my wife.

Their operational principle was “Hope for the best but plan for the worst.” They encountered the worst of the worst. I won’t say more about what happened because I might lessen the impact for readers of the surprise, awe, and admiration produced by their actions. It is better to hear the facts from Couch.

Yes, other people have written about these men, but never with so much depth and detail. Norris and Thornton told their stories to Couch, and he expanded them with interviews from eyewitnesses and his own expertise as a SEAL veteran of the Vietnam War. Couch also flawlessly interweaves history lessons relevant to their heroic actions.

By Honor Bound is his twenty-second book related to military activities, eleven nonfiction and eleven fiction.

The last part of the book describes the post-war lives of Thornton and Norris, which include Navy and FBI adventures almost as fascinating as their earlier experiences. These accounts also include eyewitness testimony.

In a final tribute to Norris and Thornton, Couch says, “Not only were they incredibly heroic during these events, but they were almost superhuman—even by Navy SEAL metrics.”

If you read this book, I predict that you will agree.

Vincent Capodanno was the youngest of ten children born into an Italian Catholic family. His heroic life is told cradle to grave in The Grunt Padre: The Service & Sacrifice of Father Vincent Robert Capodanno, Vietnam, 1966-1967  (CMJ Publishers, 202 pp., $15.95, paper) by Daniel L. Mode.

Father Mode, a chaplain in the Navy Reserves, traces  the life of Capodanno, a Navy Chaplain and Medal of Honor recipient, from his birth on Staten Island in New York, through his time at the Maryknoll Seminary in  Ossining, New York, to a mission in Taiwan, and finally to his Marine Chaplaincy in South Vietnam. That’s where the “Grunt Padre” said his last Mass, on Hill 327 near the village of Dong Son, in September of 1967.

Vince Capodanno was born on February, 13 , 1929, and “grew up during the most patriotic time in American history,” Mode writes, “with Victory Gardens, War Bonds, and blood drives. The World War 2 armistice was signed just before young Vince decided he would enter the Marknoll Seminary.”

Fr. Capodanno was ordained in June of 1958. He soon set sail for Taiwan, his first missionary assignment, where he enjoyed the teaching despite his difficulty learning the local dialect. But the language barrier had a positive effect—making him a better listener. Later in Vietnam, Mode writes, “he would attract the confidence of young Marines partly because of his unique capacity to hear what they said and what they didn’t say.”

Nineteen-sixty-five was a watershed year for Fr. Capodanno. His six-year term in Taiwan ended and he wrote to the Navy Chief of Chaplains in Washington about joining the Chaplain Corps, asking to serve with the Marines in Vietnam.

In November, 1965 Fr. Vince became Lt. Capodanno at the Naval Chaplain School in Newport, Rhode Island. After completing a three-week course at the Field Medical Service School at Camp Pendleton, he went to Vietnam during Holy Week in 1966 when American casualties averaged 400 a month.

Why did Fr. Capodanno leave the relative safety of mission work for wartime ministry? “In October, 1966 a reporter in Vietnam asked him why he became a chaplain and he answered, ‘I joined the Chaplain Corps when the Vietnam War broke out because I think I’m needed here as are many more Chaplains.'” He was “drawn to the cutting edge where he would not just be a Catholic priest, not just a military Chaplain; but a Marine,” Mode adds.

He was assigned to the 7th Marine Battalion headquarters at Chu Lai. Eight months later he was transferred to the 1st Medical Battalion. In January 1967 he extended his Vietnam tour by six months, which put Fr. Capodanno on a path for that final Mass on September 3. The next day, during Operation Swift, Fr. Capodanno was killed in action while ministering to wounded Marines.

The details of that fatal afternoon that resulted in Fr. Capodanno receiving the Medal of Honor are presented by the author in this thoroughly researched account. Reading these and the testimonials bring the reader as close as possible to the firefight without being there.

Peter Collier’s Choosing Courage: Inspiring Stories of What It Means To Be a Hero (Artisan, 240 pp., $18.95) is an image-heavy children’s book (aimed at fourth to eight graders) that presents stories of American military heroism from World War II to the wars in Afghanistan, along with a short chapter on civilian heroes in the 21st century.

Collier’s chapter on the Vietnam War contains profiles of three well-known Medal of Honor recipients (Sammy Davis, Alfred Rascon, and Bud Day), and two lesser known men who received the military’s highest honor for courage under fire: Thomas Norris and Michael Thornton. The chapter opens with a three-page summary of the war’s history that is accurate, if exceedingly brief. Collier then details the exploits of the MOH recipients and includes sidebars on combat medics, American POWs, and SEAL training.