It’s not that the photos in We Shot the War: Overseas Weekly in Vietnam (Hoover Institution Press, 214 pp. $49.95, hardcover; $11.99, Kindle), aren’t first rate. They’re really good and provide a clear look at everyday life of American troops in the Vietnam War. That said, the photos are a letdown after the big build-up from the publisher.

The Overseas Weekly is described as a trail-blazing, anti-establishment rag that was the GI’s voice: “The least popular publication at the Pentagon,” we’re told. The people who put it together must have been real rabble-rousers.

The book’s Foreword tells us that the images used in the book were culled from 20,000 photos in the Hoover Institution Library’s Archives. National Geographic also liked to trumpet how many rolls of film were shot, but I always thought the greatest boast would be getting the greatest number of unforgettable images from the fewest rolls of film.

The book is edited by Lisa Nguyen, an archivist who organized an exhibit this summer of Overseas Weekly war photos at the Hoover Institution at Stanford University. The Overseas Weekly was founded in Germany by Stanford graduates in 1950 to cover military affairs in a less-official manner. As the war in Vietnam escalated, a Saigon office was established. A young, Texas journalist, Ann Bryan, its editor-in-chief, was the only female editor in Southeast Asia.

The Overseas Weekly irritated the brass by covering such sensitive topics as drug use and racial strife among the troops. It was noted, too, for its “Man in the Street” column, which gave enlisted men the opportunity to sound off—and for running lots of photos of pretty girls. 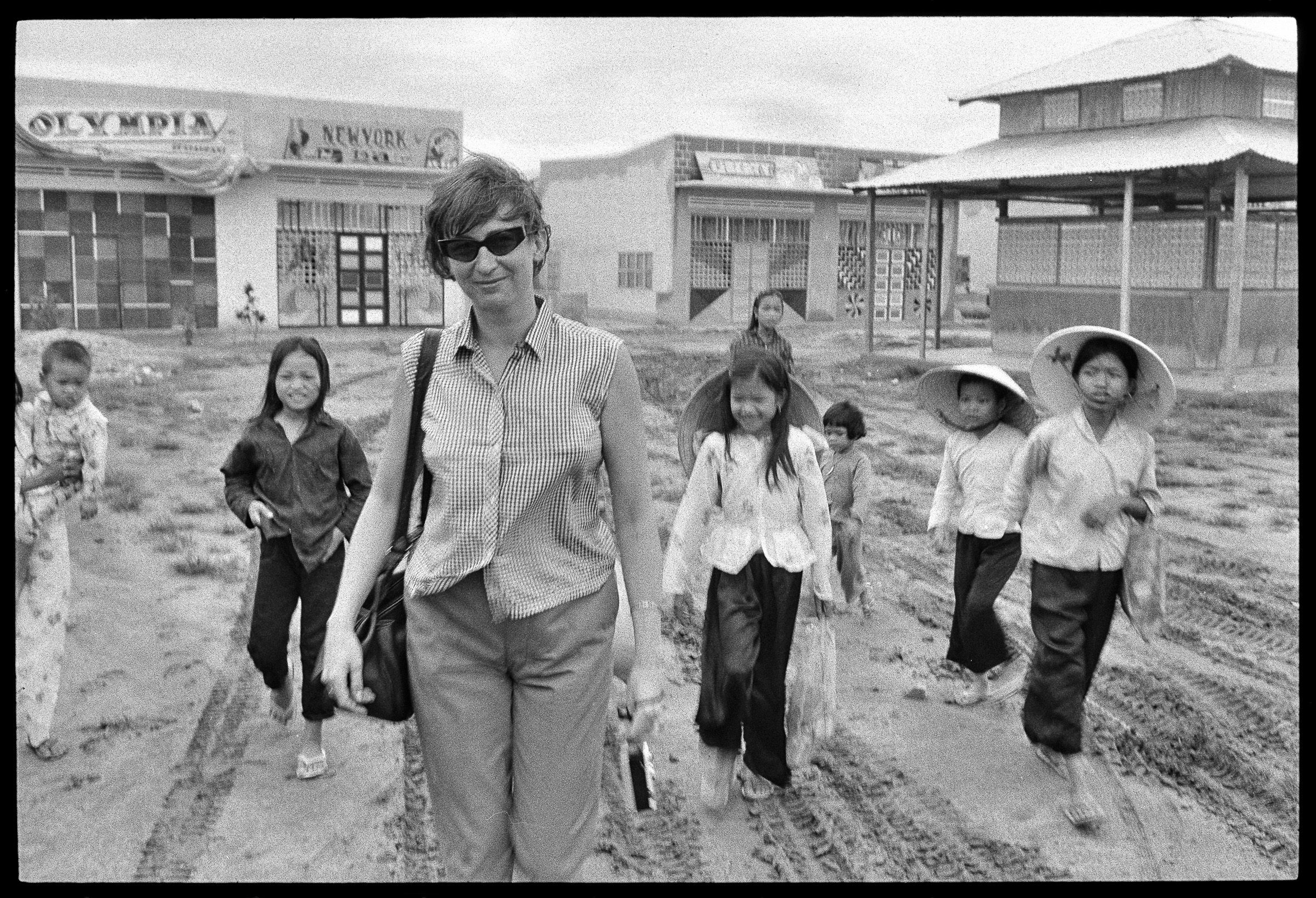 The paper had a small, dedicated staff and a shoestring budget. The first issue went to press in 1966 and by 1970 it was all but washed up. But in that four-year period its writers and photographers (often one and the same) scattered across South Vietnam and Cambodia, documented the war from the GI’s perspective. Unlike better-known media covering the war, its readers were those fighting the war.

Subsequently, the coverage became more nuanced, providing a gentler portrayal of the war’s combatants. It wasn’t pandering; it’s because the editor would be called on every error of fact and tone. Reaction was immediate because the audience wasn’t half a world away.

Terry A. Moon’s How Did You Get This Job?: The Daily Journal of a 1st Air Cavalry Combat Photographer in Vietnam  (CreateSpace, 250 pp., $12.95, paper) tries to correct a common complaint about military books: that they have too few pictures. Well, this book contains more than four hundred photos.

While I was very pleased and entertained with the photos in the book, I was disappointed to find that this year-long journal of a 1st Air Cav combat photographer had very few pictures of grunts in action.

Moon enlisted in the U.S. Army in 1968 with a guaranteed MOS as a photographer. In April, he went to Fort Ord for basic training then on to photo school. On November 13, 1968, he stepped off a 707 at the Bien Hoa AFB and his Vietnam tour began. As that 707 was landing, Moon’s photo journal also was taking off. During his tour, Moon received a Bronze Star for meritorious service and the Air Medal for all the flying he did to get to his photo assignments.

He had graduated number one in his photo class, so the 1st Cavalry Division snatched him up and stationed him at Phuoc Vinh, 50 kilometers north of Saigon. He had a unique way of getting around to different Fire Support Bases, LZs, and other locations. Moon’s press pass gave him the ability to take any open seat on virtually any airplane or helicopter going wherever he needed to go. Periodically, there were no available seats maybe thirty minutes away, so he had to cobble together multiple hops that sometimes ended up taking several hours to get to that same place.

There is a journal entry for nearly every day of Terry Moon’s tour. Much like a Command Chronology, some days are loaded with interesting entries and some are not. Virtually every photo is captioned and many are accompanied by very descriptive and educational narratives.

I found this book to be relatively interesting and learned a lot about behind-the-scenes activities required to make the seemingly apparent happen.

While How Did You Get This Job? never really grew on me, I found it to be an interesting and educational book. I read the entire book, including the photo captions, and feel it was time well spent. I believe others will agree.

Many fine photography books have come out of the Vietnam War. Some, like Larry Burrows’, are breathtaking achievements that meld art, science, and a profound depiction of war. Others—often just as compelling—bring together images by multiple photographers. Marc Waszkiewicz’ 1000 Yard Stare: A Marine’s Eye View of the Vietnam War (Stackpole Books, 328 pp., $39.95, hardcover and Kindle) is neither of these, although at first that’s not apparent.

With the help of by Lea Jones and Crista Dougherty, Waszkiewicz—who served three Vietnam War tours as an artillery forward observer—has produced instead a fine photo album chock full of compelling images. As in all photo albums, the most recurring subject is its author.

That’s not a bad thing. What we get are photos Waszkiewicz took and some his buddies took. Between them all, Waszkiewicz does a very good job of presenting a visual record of his tour in Vietnam—and afterward. With insatiable curiosity he records the countryside, the villagers, the combatants, the prisoners, and the weaponry.

But more importantly, he also records his life and the lives of the young Marines with whom he served. Sometimes they were frightened, sometimes grieved, and sometimes they were just goofy. Waszkiewicz captures something that most Vietnam War photo books miss: the spunky resilience of the young American men who served there; their inability to consider themselves victims; and their indefatigable insistence on making the best of bad situations.

There’s not a bad joke left untold, not a single joint left unsmoked. He and his fellow troops worked hard and played hard. If you had to be in hell, you should do your best to dupe the devil. And if you had to be in Vietnam during the war, Marc Waszkiewicz was a good guy to have around.

The last part of the book record trips he made with other veterans to the Vietnam Veterans Memorial and to Vietnam. As the chapter title suggests, these trips are about trying to find peace.

These later images lack the sharp, compelling edge of the Vietnam War photos, but they’re quite nice.

Steven Burchik served as a sergeant with D Company of the 1st Infantry Division’s 2nd Battalion, 18th Infantry Regiment in Vietnam in 1968-69. Burchik was a forward observer, not a photographer, but he often had his camera with him. During his tour he took more than four thousand photographs. None of combat, he notes, since that’s when he was using a rifle—not a camera.

Burchik mailed the film to his wife, and didn’t see his prints or slides for the first time until after he returned from Vietnam. “It was an amazing experience to view them and remember the circumstances surrounding each image,” he writes in the introduction to Focus on Vietnam (Sharlin-K Press, 120 pp., $29, paper).

After that memorable experience, Burchik boxed up the photos and rarely looked at them until he was asked in 2013 to make a presentation on the war to a high school English class. Speaking to the class reignited his interest in the Vietnam War, and he wrote and published Compass and a Camera: A Year in Vietnam in 2014, followed by Focus on Vietnam.

You won’t find any Great Photographs in this new volume—no decisive moments, no grand tableaux, no epiphanies, no perfect compositions, no “Oh my God” images. The Vietnam War produced many great photographers—many unheralded—who left a trove of images of the beauty, the horror, the cruelty, and the kindnesses that resulted from America’s involvement in the conflict. Burchik is not one of them.

He took for himself a more prosaic task: depicting the daily life of the combat soldier.

Focus on Vietnam is arranged thematically into short chapters, each with brief introductory notes combined with relevant photos. The chapters reflect the interests of young Americans serving halfway around the world: weapons and transportation, children and villagers, Saigon and stand-downs, wading through rivers and tracking through jungles, pacification and the rice harvest. Burchik, curious and fresh-eyed, kept his camera by his side and recorded the life that passed before him.

That’s the book’s power: a record of one man’s life as it is swept into a tidal wave of events far beyond his control. Everyone else depicted in his book, both American and Vietnamese, has similarly been swept up by the war. Yet daily life goes on, perhaps having taken on a sort of exotic sheen or at least an awareness that those involved are living history.

Burchik’s book, perhaps, will be best appreciated by those who have served and those who may soon serve. His images are fascinating yet familiar.

“Mortars, Heavy Equipment, and Books” could easily be added to the subtitle of Snakes, Rain and the Tet Offensive: War Stories With Photos by William Ingalls (War of Words,  271 pp., $90), a remarkable recollection of the author’s 1967-68 Vietnam War tour of duty.

Ingalls’ first day with the 362nd Combat Engineers was also the first time he had done “more than turn the key in a road grader,” he writes. “Each day was a learning process.” The unit spent five months in the shadow of Nui Ba Den (Black Virgin Mountain), expanding Tay Ninh Base: building roads, helipads, bunkers, and hootches. The Viet Cong were entrenched on the mountain so mortar and rocket attacks were a constant threat.

Ingalls freely expressed his antiwar opinions, but he also was dedicated to his work and took pride in the well-built culverts and base construction projects he worked on. When he was selected as his company’s Soldier of the Month, the officers and NCOs asked for his opinions on the war. “Just following orders didn’t work for the Germans and Japanese,” Ingalls replied, “so why should it work for me?” The Soldier of the Month award was withdrawn.

Ingalls made good use of his downtime, shooting some three hundred slides of daily life on the base, including photos of the showers, mess halls, hootches, and bunkers and the occasional makeshift brothel or store. He read Hemingway, Kafka, T S. Eliot, e e cummings, Rod McKuen, and others in his grader cab during work breaks.

During Ingalls’ sixth month in country the company was relocated to what he calls “The Cambodian Adventure,” building a Special Forces base camp on the border “directly in front of the Ho Chi Minh Trail.” Disobeying a sergeant’s order to go to the aid of some men wounded in an ambush saved Ingalls’ life. He refused, citing an Army regulation never to abandon your equipment.A group of engineers “drove down to the ambush site, and were all promptly killed,” Ingalls writes. “Thirteen guys gone, just like that.”

He credits his first wife Faith for sending his “Communist East German EXA-1″ camera to him in Vietnam, enabling him to produce a photographic record that Ingalls likens to Mathew Brady’s work in the American Civil War.His wife saved all the slides in a shoe box.

The quality of the images ranges from hastily shot photos to carefully captured ones, such as nighttime explosions and tracer trails.

Bill Ingalls’ MOS was 62E-20 (Road Grader Operator). With this work, he has added Photojournalist to his resume.