Love Found and Lost: The Kim Vui Story (Texas Tech University Press, 260 pp. $26.95, hardcover; $8.99, Kindle), is an interesting and important autobiography by a Vietnamese actress and singer who was the most glamorous—and famous—star in the South Vietnamese entertainment industry in the 1960s and 1970s. This is also the story of Saigon’s nightlife and film scene during the American war years.

Kim Vui was six years old in 1945 when the Japanese surrendered to the United States near the end of World War II, which led to chaos in and around Saigon as the French tried to regain control of their former colonial capital. Amid the uproar, Kim Vui fled with her family to the Mekong Delta to begin a new life in the countryside. The next year she saw French forces murderously rampaging through her village. The family subsequently returned to Saigon.

With fond memories of singing in her Catholic church, Kim Vui began performing in theaters in Saigon at an early age. In spring of 1955, after France had lost all its Indochinese colonies, the sixteen-year-old Vui was pregnant by a young man she would only see once more in her life.

After her first child was born she finished secondary school and returned to singing in restaurants. Kim Vui also worked in a government program taking music, dance, and propaganda into the countryside to support the noncommunist South Vietnamese regime during the war against the North Vietnamese and Viet Cong.

South Vietnam was developing a small film industry and Kim Vui starred in her first movie in 1957. Ten years later, with Saigon now “a capital in the midst of war,” she had become a popular entertainer, known as a singer of “tragic love songs.” But having failed to find true love, Kim Viu writes, “I made myself ignore the past, live in the present, and always look to the future: to forget the illusion of love and think only of my children.”

In 1968 she took part in an Asian ensemble that had a few gigs in Las Vegas. Returning to Vietnam, she starred in two films with anti-communist themes. After marrying an American civilian, she moved to the U.S. with her children and parents. After that “marriage of necessity,” she wrote, “I would learn that one can survive, even in the absence of happiness.”

She would eventually find herself taking one final stab at finding true love. Despite multiple marriages and occasional other relationships, Kim Vui was doing all that she thought she could to make a safe, successful, life for herself and her six children.

In Love Found and Lost, Kim Vui presents a rare and satisfying glimpse into the social life of upper-class Vietnamese citizens in South Vietnam during the war. Her strengths and maternal influences shine throughout this story—a story of a woman, herself, full of love.

When most of us hear the term “Boat People,” we think of South Vietnamese refugees escaping to the United States after the communist takeover in 1975. Nghia M. Vo’s Vietnam War Refugees in Guam: A History of Operation New Life, (McFarland, 203 pp., $35, paper; $16.49, Kindle), focuses on a what happened to more than 110,000 people who fled Vietnam and reached the island of Guam that year.

Vo is a researcher who specializes in Vietnamese history and Vietnamese-American culture. He has written several books and many articles on those subjects. His 2021 book, The ARVN and the Fight for South Vietnam, is interesting, intriguing, and very educational. His new book also contains a heavyweight history lesson.

Vietnam War Refugees in Vietnam, which deals mainly with Operation New Life, covers three general areas: The final days of the American war in Vietnam; the flight of tens of thousands of South Vietnamese to Guam and other staging areas; and the reception they had when landing in the U.S.A. and began trying to assimilate into American culture.

For the most part, the citizens of Guam accepted and welcomed the beleaguered Vietnamese refugees with open arms. The Guamanians volunteered their time, skills and excess goods (food, clothing, toys, and more) to these strangers from a foreign country.

Vo writes very clearly and definitively about individual North and South Vietnamese people and Americans, revealing their motivations, strengths, and weaknesses. The book teems with charts that offer a clear picture of the daunting tasks faced by American military personnel and aid workers—and by the refugees themselves.

Vo lists three types of general loss: casual (property, wealth), relationship (family, friends), and country (freedom and independence). With the communist takeover of their country in 1975, the South Vietnamese experienced all three of these losses.

In practice, communism betrays itself when, under the guise of “reeducation of the masses,” party leaders treat their own citizens as slaves. The communist theory of equality among people vanishes amid the chaos of culling the “un-trainables,” a situation that prevailed devastatingly when communists took control of Russia, China, Cambodia—and Vietnam.

In Standing Up After Saigon: The Triumphant Story of Hope, Determination, and Reinvention  (Brown Books, 190 pp.; $17.21 Hard), Thuhang Tran, with the help of Sharon Orlopp, describes what happened in Vietnam after the North Vietnamese and Viet Cong communists took control of the nation in 1975.

A dual memoir, the book studies the resilience of one family fractured by the ending of the Vietnam War. The family’s youngest child, Thuhang, and her father, Chinh, take turns in narrating life in Vietnam under communist rule for the family members who could not leave in 1975. They also describe Chinh’s determination to make a new life in America for his family. Their recollections are inspirational.

A polio victim reduced to crawling and squatting, Thuhang—along with her mother, brother, and sister—survived fifteen years of fragile existence in Vietnam until they were reunited with her father, a South Vietnamese Air Force air traffic controller who fled as the North Vietnamese Army entered Saigon. Chinh ended up in the United States. For five years, the family believed he had been killed in a helicopter crash. Eventually, he found them. It took ten more years for him to fulfill the requirements of America’s Orderly Departure Program and get his family out of Vietnam.

Although Thuhang is the principal subject of the book, the actions of Chinh and his wife Lieu read like a manual for protecting children. Lieu guided the children through war, forced farm labor, homelessness, famine, and stark poverty. She used bribes and other ruses to keep her son out of the army, including during the 1979-89 war with Cambodia. From America, Chinh provided a flow of money and other help.

Initially, Thuhang’s life in the United States consisted mainly of surgery and lengthy physical rehabilitation that enabled her to stand and walk. She then attained American citizenship and earned a bachelor’s degree from the University of Texas at San Antonio. She has spent many years as a software engineer in Texas and Arkansas.

Thuhang also has organized and worked with groups that aid needy Vietnamese children. Chinh has helped Vietnamese refugees ease the transition after moving from an Eastern to a Western culture.

Thuhang’s brother and sister started businesses and raised families in America. They also they have endured their share of hardship. 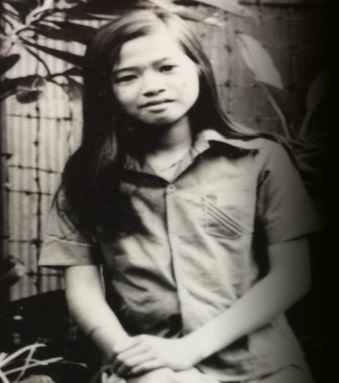 Thuhang Tran as a child in Vietnam

Standing Up After Saigon provides a great amount of information about the assimilation of Vietnamese into America. It also addresses the plight of refugees and the increasingly controversial acceptance of immigrants into the United States.

Co-author Sharon Orlopp is an editor and author who retired as Walmart’s Global Chief Diversity Officer and Senior Vice President of Human Resources. Part of her job was teaching the world about different cultures.

M H Murphy’s The Ashes of War: The Plight of the Vietnamese People at the End and after the Viet Nam War (CreateSpace, 434 pp. $21.95, paper; $9.99, Kindle) deals with what happened to—as the book’s subtitle notes—Vietnamese people after the fall of Saigon in April of 1975. The author served with the U.S. Marines in Vietnam in 1965-66.

Murphy, a member of Vietnam Veterans of America, became interested in the South Vietnamese refugees when he wrote an introductory guide for people who had relocated from Vietnam to the Chicago area. He did years doing an extensive amount of research in compiling The Ashes of War.

In the book, Murphy alternates between telling the stories of two South Vietnamese refugees. One is a former Saigon police officer who escaped by boat. It was surprising to learn that there were 2.5 million refugees who fled Vietnam, causing a humanitarian crisis and coining the term “boat people.” The stories of boats capsizing, pirates attacking, and starvation and suicide among the refugees were very powerful.

The second thread tells of a tea-shop owner who chose to stay in Vietnam after the communist takeover. The new regime closed his family business and sent the owner to a reeducation camp. Murphy writes that more than 300,000 people were sent to these camps. Conditions were terrible and reminded me of stories of concentration camps during World War II.

The tea-shop owner was released after a year when his family bribed the guards. He did find love among the hardships and ended up getting married before fleeing.

I wish the author would have written briefly about where the two main men ended up. Was it Chicago? Did they ever go back to Vietnam? Were they reunited with their families?

That said, I highly recommend this book.

Among the tens of thousands of refugees who needed resettling after the fall of the Saigon government on April 30, 1975, were the members of the Tai Dam people, also known as “Black Tai” because of the color of their clothing. Originally from northwestern (North) Vietnam and Laos, the Black Tai had their own language and system of writing.

A campaign to bring them to this country began in the summer of 1975; letters were written to thirty U.S. governors seeking help. Only Iowa’s Republican Gov. Robert D. Ray agreed to resettle the Tai Dam in his state. Today more Tai Dam live in Iowa than anywhere outside of Asia. AThere have been expected (and unexpected) adjustment problems on all sides.

Matthew R. Walsh’s The Good Governor: Robert Ray and the Indochinese Refugees of Iowa (McFarland, 244 pp., $35, paper; $9.99, Kindle) includes interviews with dozens of refugees and resettlement officials who paint a picture of struggle and resistance, but also of hope and promise.

Ray was alone in his compassion among sitting governors in his efforts to welcome a group whose 12th century lifestyle was bound to conflict with 20th century America. He was determined to build a workable program that would integrate the two cultures in a way that preserved both without diminishing either.

Ray also was involved with Cambodian refugees after he and a delegation of governors visited Tai Dam and Cambodian refugee camps in Thailand in 1979.  While there he watched as men, women, and children died for lack of food and medicine.

Working with Iowa SHARES—a program that brings people together in response to humanitarian needs without respect to ideology, ethnicity, faith traditions, or other ism’s and ology’s—the needs of Cambodian refugees were also met.

As we have witnessed over the generations, our rich national fabric is strengthened and enriched by the frequent incorporation of those fleeing oppression and hate and those looking for better opportunities for their families. Now, nearly 50 years later, the Tai Dam of Iowa are no different thanks to a caring army of volunteers aided by government and non-governmental agencies moved to action by Robert D. Ray, a United States Army veteran who served as Iowa’s Governor from 1969-83.

That is the uplifting story told in his worthy book.