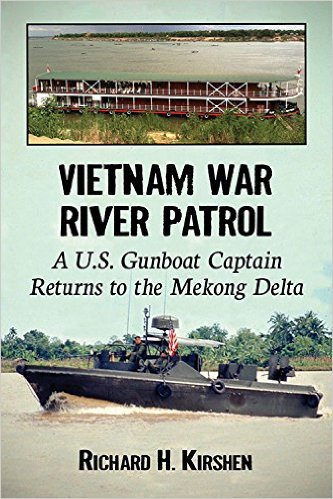 Second Class Petty Officer Richard H. Kirshen was a three-year Navy enlistee who served eighteen months in Vietnam in 1969-70. For much of that time he captained a Landing Craft, Mechanical (LCM) along the waterways near Nha Be and Cam Ranh Bay.

An LCM, he says, “is the boat you see in all the World War II movies where the soldiers run off the front onto the beach after the ramp is dropped.” In Vietnam, however, Kirshen and his three-man crew used the gunboat primarily to deliver supplies and troops to support bases. Another difference: Their LCM was a true gunboat; it carried two 50-caliber and two M-60 machine guns, along with an M-79 grenade launcher.

Ambushes and brief but furious firefights were a common part of life. Kirshen’s accounts of his crew’s experiences in Vietnam War River Patrol: A U.S. Gunboat Captain Returns to the Mekong Delta (McFarland, 260 pp; $29.95, paperback; $9.99, Kindle) make good reading. Among the most riveting: the section on what happened the night two enemy B-40 rockets hit the boat “right at the waterline” and blew the men into the water, after which the boat sank in “a matter of minutes.”

Kirshen, a long-time member of Vietnam Veterans of America, also talks about relatively under-reported war activities, such as his underwater duty as a diver, one of the few in-country, during the final six months of his tour.

These events comprise about half of the book. Kirshen intersperses his war memories with what he saw and did forty years later as a tourist on a vacation highlighted by eight days on the Mekong River aboard a luxury cruise ship.

Kirshen, his wife, and friends went to—among other places—Phnom Penh, the Cambodian Killing Fields, and Angkor Wat. In these sections he provides interesting historical background info, including detailed descriptions of the atrocities that took place during the 1975 Khmer Rouge holocaust.

At the same time, he repeatedly emphasizes the quality of food and service provided by the trip coordinators. These passages could be a sales pitch for the ship and the hotels where Kirshen and his party stayed.

In general, Kirshen has a keen eye for detail, a ready sense of humor, and the skill to turn a phrase. One of his best lines: “That was a venue where M-16s and side arms were as common as a crooked politician or a sun visor in Miami.”

He includes an outstanding collection of photographs of both wartime and tourist subjects. Overall, the war stories top the vacation trip in interest, but Richard Kirshen gives the best he has in the latter case.