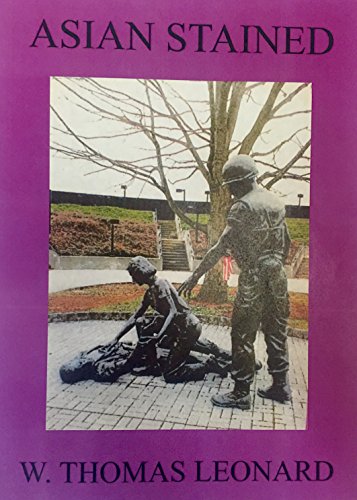 Now that I’ve read the stories in W. Thomas Leonard’s Asian Stained (BookBaby, 235 pp., $2.99, Kindle), I believe that the title indicates the author’s hard-held belief that the Vietnam War stains (or taints or besmirches) everyone who experienced it. This book starts off by introducing two Marines I assumed would be main characters, 2nd Lts. Kevin Charles Barrett and William Francis Kelly. Both are on the plane to Vietnam for their thirteen-month tour of duty. Leonard served as a Marine lieutenant in the Vietnam War in 1968.

Spoiler alert: Don’t read on if you want to be surprised.

These two young men have been best friends since they were nine years old. They both had just graduated from Fordham, with scholarships, in 1967. Not exactly a great time to graduate from college. They both promptly enlisted in the Marine Corps and were assigned to the 3rd Marine Division, 3rd Battalion, 9th Marines, winding up in Dong Ha, in Vietnam in I Corps close to the DMZ.

The book then skips forward fourteen years to the dedication of the Vietnam Veterans Memorial. Two old men are at the wall—a Mr. Barrett and a Mr. Kelly. They find the names of their sons—Kevin Barrett and William Kelly—right at the top of the panel where they expected them to be. We’ve read five percent of the book, at least according to my Kindle.

The next section is entitled “Deserters.” However, we don’t get to follow Barrett and Kelly’s tours in Vietnam. I can deal with that, but what does the reader get? Lots of stories that follow. Including at least three dealing with Marines being incarcerated in brigs, with much detail about that confinement.

Twenty percent of the way through the book the reader encounters magical realism in the form of a vision or a fantasy of something that looks like a large aircraft with no wheels. It’s V-shaped and has the form of a wall. “It’s where the past, the present and the future merged,” a Marine says.

This is a bleak book, made up of many stories, often of second-generation Americans who were raised in this country of opportunity and served in a war that horribly scarred them or killed them. The dozen or so stories are rarely happy ones, not even a little bit.

Once we get past “Deserters,” we are presented with stories in which hard-working veterans are fired unfairly or treated brutally. The stories are well-written but often hard to read. I, for one, hate to read about people who are cast into outer darkness for no reason other than the fact that someone with power can do so.

In one of the stories near the end of the book the character, Alex Kazakov, returns from his war minus his vision and three of his limbs. He is a character we get to know well, so his terrible scarring and crippling really hits home. Tears came to my eyes as I read the bad stuff that happens to him.  He’s lost everything but his mind. He learns Braille and does make something of himself, earning a Master’s in Creative Writing.

The overwhelming message of Asia Stained is a warning to everyone to avoid serving in the Marine Corps, especially in the Vietnam War. I didn’t need convincing; I am not going to recommend to my children that they join the Marines. My father was a Marine on Iwo Jima. One was enough for this family.

Read this collection of stories if you want to consume a really sad book of well-written tales about Marines. Otherwise, read something else. I’m having major trouble getting these stories out of my mind. And out of my dreams.

This is not the usual Marine Corps novel as it is based on the author’s 1968-69  tour of duty in the Vietnam War as a Civil Affairs officer. Leonard calls it a “non-infantry centric novel set in South Vietnam in 1968, at the height of the Vietnam War.”  Maybe so, but there is a lot of combat in it; much blood is spilled.

There also is a big love affair between the main character, USMC 2nd Lt. Jack Brady, and his translator, Tran Thi Sam. It won’t surprise you that that affair is fraught with cultural communication problems and ends badly, as does Brady’s engagement with his love back home. That young woman gets caught up in the antiwar movement and falls for a draft dodger. Some of those draft dodgers were charismatic and charming—although unwashed, of course.

One of our hero’s closest friends, Mike Donnelly, is in Vietnam primarily to try to find his missing brother. He and Brady enlist Sam as a helper in this quest. Dire consequences ensue.

I enjoyed reading about Brady’s futile efforts to win the hearts and minds of the villagers while his fellow Marines were doing their best to kill them. He was often told that he should have joined the Peace Corps if he wanted to do that sort of work. I agree.

The most interesting part of this novel was the stuff about the Marine Corps brig where malcontents, many of them African-American, were imprisoned. The death of Martin Luther King caused the inmates to riot; that riot is well presented.

Leonard captures what it was like to be in a military prison in Vietnam during the war. I never was in that Marine Corps brig, but I did enter Long Binh Jail several times, and Leonard summons up what it must have been like to be housed in those oven-like Conex containers.

Much time is given to presenting the African-American prisoners and their gripes and grievances, as Brady has to (at different times) defend and prosecute prisoners.The sentences handed out are draconian, but realistic given that the Marines were at war, and orders are given to be followed.

At first I had little sympathy for the African American prisoners and their problems. But then it occurred to be that the idea that the Marines were an all-volunteer force was a fiction and that many of those prisoners had no doubt been drafted into the Corps.

They did not like being Marines “fighting a White Man’s War,” as Brady says. “He knew blacks didn’t stand a chance in the military system.” That was my impression, too, when I was interviewing prisoners at LBJ.

The book is not especially well-edited; it could use a few thousand commas. Also, Leonard calls into doubt the credibility of his book as a historical novel when he has a main character indulge in a clichéd rant about Jane Fonda.

Anachronisms that addle history are an annoyance, especially when they are easily prevented by minimal research. Jane Fonda’s trips to Hanoi took place in the 1970s, so no Marine Corps lieutenant would be toasting “Hanoi Jane, one of our most ardent and vocal supporters” in 1968.

The novel touches bases with the usual issues that Vietnam War fiction deals with: baby killing, Indian country, John Wayne, and “the frustrations about finding an enemy who wouldn’t fight, only snipe at you and lace the entire area with deadly booby traps.”

The great strength of this novel is that it deals with the Peace Corps-like aspect of what it was like for a Marine lieutenant to be trained as an infantryman, but then have to work as a Civil Affairs officer. The frustrating task of winning hearts and minds by building wells in villages while being hampered by South Vietnamese corruption and VC interference (not to mention Marine Corps chicken shit) makes for an interesting read.

This is another Marine Corps book that made me glad I chose to serve in Vietnam in the Army.