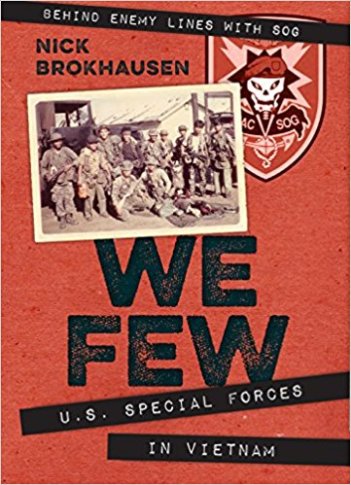 Nick Brokhausen’s We Few: U.S. Special Forces in Vietnam (Casemate, 360 pp. $32.95) reminded me of Dale Dye’s Run Between the Raindrops and Hunter Thompson’s Hell’s Angels: A Strange and Terrible Saga. Brokhausen mixes irreverence, perversity, and sarcasm with touches of gonzo journalism to recreate his 1970 tour with the Military Assistance Command Vietnam Studies and Observations Group (MACV-SOG), his second  of the war.

Guided by a captain company commander (a former E-7), Brokhausen, Mac, and Cookie (three sergeants) led Recon Team Habu, which was made up of Montagnard fighters. They helicoptered into areas controlled by the NVA, most frequently near Quang Tri and Phu Bai.

They also worked Laos, targets north of the DMZ, “and a few other places best left unmentioned,” as Brokhausen puts it. Primarily, Habu conducted secret missions to observe or disrupt operations behind enemy lines. Their most anticipated but unfulfilled goal was to capture a high-ranking NVA officer.

Brokhausen and his men considered themselves above the normal rules of social behavior. In the field, Habu displayed “pure aggression and murderous efficiency,” he says. Off duty the sergeants acted like members of an outlaw motorcycle gang. According to Brokhausen, they regularly got drunk; stole Jeeps and other equipment; outsmarted or bribed people; and fought or bullied drunken outsiders, MPs, rear echelon personnel, officers,  Air Force “zoomies,” drug users—and even Donut Dollies.

From its opening, the book’s negative intensity irritated me. Consequently, I read only a few chapters a day over the course of a week—cover to cover. Brokhausen provides a constant flow of outrageous figures of speech, quips, one liners, and bitches, along with lots of reconstructed dialogue. He leans heavily on superlatives. He categorizes people, places, situations, and events as the best or the worst with little middle ground.

Nevertheless, Brokhausen draws convincing pictures of his fellow Green Berets’ combat skills and idiosyncrasies and the areas in which they operated. He taught me lessons about Special Forces tactics and weapons—more than I learned from Ken Burns’ television saga on Vietnam, which I never finished watching.

Brokhausen, third from left, with his Recon team

“A war zone encourages the eccentricities in all of us,” Brokhausen says. Overall, he recreates what he did and saw back in the day—for good and for bad, and far beyond bad.

Since his Army service, Brokhausen has had a successful civilian career in security and military-related businesses.

We Few was originally published in 2005. According to Brokhausen, “This [edition] is the first of two” detailing SOG operations.